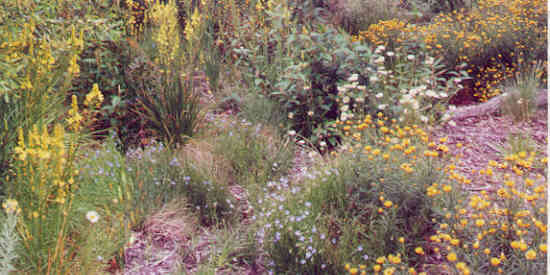 "The country around here is enchantingly beautiful - extensive rich plains all around with gently sloping hills in the distance, all thinly wooded and having the appearance of an immense park. The grasses, flowers and herbs that cover the plains are of every variety that can be imagined."
from the diary of John Henry Norcock, Melbourne, 29 September 1836.

In addition to the plants listed above (all of which were used by the Kooris and early settlers for food or utilitarian purposes), the following plants have been planted on Herring Island as part of the Friends revegetation program.


CLICK HERE NOW to view all the pictures of the plants on this page instead of in the menu bar.

A small white daisy which grows on moist to wet soil. Flowers September to January.

Black Sheoak - (Allocasuarina littoralis) - Tree to 8 metres tall. Flowers from March to June. Male flowers are borne in fluffy brown spikes. Female flowers are a small crimson hairy tuft. Sheoaks are sometimes mistaken for pine trees; what looks like pine needles are actually leaf stems where the leaves have evolved to microscopic size.

- A very prickly plant flowering from December to January. Needs good drainage. Dies back in autumn and re-shoots in winter.

Burgan (Kunzea ericoides) - A large shrub or small tree which rapidly spreads itself by seed, forming a dense thicket. A favourite nesting site for ringtail possums. Prefers an open position in moist soil, flowering from November to February.

Common Correa (Correa reflexa) - Variable from open to dense shrub. Flowers from March to September, but also sporadic at other times. Attractive to nectar-feeding birds.

Spreads out to form a low mat. Flowers September to January.

Drooping Cassinia or Chinese Scrub (Cassinia arcuata) - A small shrub with tiny brown cinnamon scented flowers from December to June. The name "Chinese Scrub" comes from the time of the gold rush when it grew on disturbed soil around old mines which were often re-worked by Chinese diggers.

Forest Germander (Teucrium corymbosum) - A small shrub which grows in moist soil in semi-shade. Flowers from December to January.

- Tall shrub with flowers October to February. Prefers an open position in moist to wet soil.

Golden Wattle (Acacia pycnantha) - Australia's Floral Emblem. A large shrub or small tree with strongly perfumed flowers from August to October. A gland at the base of the leaf-stem provides food for nectar-eating birds. Grows in dry soil and is very drought tolerant.

Grows in a protected position in moist, well-drained soil. Flower stems rise from a small grass-like tuft from September to December. Visiting insects set off a trigger mechanism which deposits pollen on their backs.

A ground dwelling orchid. Flowers in late winter/early spring, dying down to a tuber in summer. Tubers were eaten by the Wurundjeri people. Grey Everlasting (Ozothamnus obcordatus) - A small shrub with dark grey/green foliage. Grows in dry open forest. Flowers Spring and Summer.

a hybrid of Large Bindweed and Greater Bindweed (Calystegia sepium) or (Calystegia silvatica) - Large Bindweed is a local native plant.
Greater bindweed is a native of southern Europe which has been introduced as a garden plant.
The imported plant is now much more common than the local plant, which is threatened with absorption into the larger gene-pool.

Long Purple Flag (Patersonia occidentalis) - Flower stems arise from a tussock of strap-like leaves from October to January. Flowers last one day only. Prefers a sheltered site in moist soil.

- Creeping groundcover, flowers most of the year, profusely from August to November. Prefers moist soil in semi-shade.

- Tall shrub with prickly leaves. Grows in a moist to wet position. Flowers October to November.

Pussy Tails - (Ptilotis spathulatus) - A small prostrate plant which dies off in summer after flowering between September and January.

- Clover like groundcover with flowers September to December. Prefers dry soil in semi-shade.

Silky Hakea (Hakea sericea) - Medium sized shrub with prickly foliage and white or pink flowers from July to September. Prefers a sunny position in well-drained soil. Small birds use the prickly foliage as a refuge.

Slender Onion Orchid (Microtis parvifolia) - Terrestial orchid, with onion like leaves and many tiny green flowers growing on a 40 cm tall spike. Grows in moist, grassy areas. Unlike most native orchids, this one is quite easy to cultivate.

Slender Sun-Orchid (Thelymitra pauciflora) - This plant was recorded growing wild on Herring Island in the 1991 flora survey, but has not been seen on the island since then.
Melbourne's bushland once had many species of orchids growing abundantly. Unfortunately these orchids are vulnerable to environmental disturbance and are becoming increasingly rare.
Most of our native orchids are difficult to cultivate and are more difficult to re-introduce to the wild.

- A climber to 5 metres, preferring an open position in dry, well-drained, heavy soil. Flowers July to October with feathery seed heads in November and December.

- A tall shrub which grows in a moist sheltered position. Flowers September to December.

Sticky Everlasting (Bracteantha viscosa)- A biennial multi-stemmed plant. The flowers have a papery texture. It prefers an open position in dry soil and flowers August to April.

- A small plant which grows in dry, well-drained soil. Flowers October to February.

Tree Everlasting (Ozothamnus ferrugineus) - A large shrub which grows in moist soil in an open position. Flowers from November to February.

Twiggy Daisy bush - (Olearia ramulosa) - A small plant which grows in a dry position, sun or shade. Flowering from September to May.

- A tall shrub which grows in a moist sheltered position. It gets its name from the profuse flowers which come out around Christmas time. Also called the "Mint Bush" because of the minty aroma of its leaves.

- Grows in shallow water. The Wurundjeri people gathered the sweet underground tubers which were eaten raw or roasted.