Impermanence combines Alexis Beckett’s exquisitely delicate two and three-dimensional tributes to threatened or extinct native birds with Alister Morley’s pock-marked lunarscapes, which hint at the moon’s cyclic influence on our psyches. Both artists pursue a fascination with the significance of ‘the ephemeral’ within, and beyond, our immediate surrounds.

Mary Newsome has developed a fascination for what she terms ‘the network of creek beds throughout part of eastern Australia, some meandering back and forth four times, ma[king] up a creeky labyrinth, with the road an unwinding ball of string’. In charting Inland Waters, Newsome exhibits the results of her compulsion in the forms of a scroll, an artist’s book and a series of banners, which detail the unpredictable and varied namings of creeks, gullies and waterways across the eastern length of Australia.
In keeping with her ongoing series of works that refer to memories of place, and the charting of environmental changes wrought by European intervention, Antonia Chaffey will create a temporary outdoor installation from grass and river pebbles, and a series of miniature wooden-paneled landscapes within the gallery. These works join those of Newsome in a mapping of inland waters, in particular the River Murray, the Mungo (Willandra) lake system and the Malley area. 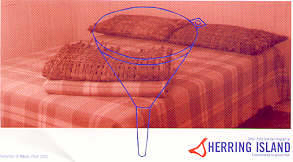 Last summer, Queensland artist Sebastian Di Mauro was artist in residence at Parks Victoria’s ‘Nilja’, located beside the Yarra River in Warrandyte. Beside the river grow Mountain Ash Gums which shed large quantities of bark between December and January. The bark used in Di Mauro’s artwork produced whilst at ‘Nilja’ was collected from the Mountain Ash trees. The conceptual premise for the work is based around the notion that in a technological world we have ignored our dependence/interconnection with nature. By bringing the bark into a domestic environment in an installation consisting of a bed with bark blankets, pillows, cups and a T-shirt and digital prints of the objects in situ at ‘Nilja’, the artist hopes to trigger recognition of the importance of nature in 21Century life.