One of the aims of the "Friends of Herring Island" in planting native plants on the island has been to encourage native birds to return to the island. The following native birds have been sighted recently on the island and we trust that with more plantings of indigenous plants, even more will return.

Similar to Silver Gull but with black cap with short crest at back of head. Wings dark grey, with white underbody and neck.

Inhabits all coastal and continental shelf areas. Its natural food mainly small fish and other marine life but it will scavenge waste food and offal. Not likely to nest on the island but a regular visitor.

Common throughout Australia, the eastern swamphen lives on the reed beds around the island feeding on grass, aquatic plants and small freshwater animals. It builds a nest of reeds and other plant material built on broken down reeds. Lays up to seven eggs in season (between August and December.

Common throughout Australia. Commonly seen fishing in the river where, because its feathers are not waterproof, it swims low in the water. Regularly seen drying its feathers on the jetties and trees overhanging the river around the island. Lives on aquatic life. Builds a flattish nest of sticks and small green twigs, placed on a branch of a tree. Lays between four and seven eggs in a breeding season from September to January.

Height 630 mm (25") Large black bird with a yellow patch around the bill and eye. Common throughout Australia and around the island. Characteristics are similar to the Little Pied Cormorant.

Height 390 mm (15") Very common throughout Australia and throughout waterways and coastal areas of Melbourne.

Long legged grey and white bird. Its natural food mainly small fish and other marine life but it will scavenge waste food and offal.

Not likely to nest on the island but a regular visitor. Lays up to five eggs which vary considerably in the ground-colour and distribution of markings in a breeding season from May to February.

Medium large dark bird with white under tail and a red-orange bill. Seen in the reed beds around the island feeding on aquatic plants, and insects.

Lays five to seven eggs in an open nest made of reed-stems and dried grasses built on a platform of broken-down tussock between August and December.

Large brownish duck with white lines above and below eye, white on throat and under wing, with a green wing patch.

Seen around the island living on grass, herbage, aquatic plants and animals.

Lays eight to fourteen eggs during a breeding season from July to December. Makes an open nest of dried grass and lined with feathers; often placed on the ground among rushes or grass growing near water .

Distributed throughout most of the mainland and Tasmania. Commonly seen grazing on the island or on the nearby river banks near Como Landing.

Lays six to twelve eggs in a nest located in a hole in a tree, lined with feathers and down; often high up, and sometimes far from water. Breeding season: all the year, dependent on rainfall.

Singly, in pairs or in small groups, frequenting swamps or margins of lakes and streams. It is nomadic and rather rare. Feeds on aquatic animals.

Lays four, pale bluish-green eggs, (the surface being minutely pitted) in a nest made of a platform of sticks, placed in the branches of a tree growing in or at the edge of water; breeds in colonies, often in association with other wading birds.

White, long legged fresh water bird. Distributed in northern and eastern Australia, from Exmouth Gulf(W.A.) to western Victoria, occasionally to South Australia; very rarely to Tasmania; also occurs in many other countries. Not recorded in the 1990 fauna survey of Herring Island.

Singly, in pairs or in small flocks, frequenting swamps or margins of lakes and streams. It is nomadic and rather rare. Feeds on aquatic animals.

Lays three to five, pale bluish-green eggs, the surface being slightly glossy and minutely pitted in a nest made of a platform of sticks, placed in the branches of a tree growing in or at the edge of water; breeds in colonies, often in association with other wading birds.

Usually seen wading in shallow water around the isalnd or perched on a dead limb of a tree near water. Lives on small freshwater animals and insects.

Lays three to six eggs on a flattish nest made from sticks, placed in the branches of a tree sometimes well away from water.

Moderately rare throughout most of Australia.

In pairs or flocks, frequenting margins of streams and swamps. It is a nocturnal feeder, but may be seen during the day roosting among bushy limbs of trees growing in or near water. It utters a harsh croaking note. Feeds on yabbies, freshwater molluscs, frogs and aquatic insects.

Lays three to six eggs on a scanty platform of sticks, placed in a horizontal branch of a tree sometimes well away from water.

Singly or in pairs, in inland lakes or waterways throughout mainland Australia. If disturbed when swimming, will submerge its body leaving only the head and neck above water, thus the name snake-bird. Feeds on fish and aquatic animals.

Builds a substantial platform of twigs and sticks, in a low tree either overhanging or in water. Lays 3 - 5 greenish eggs covered in whitish lime, when conditions are suitable. 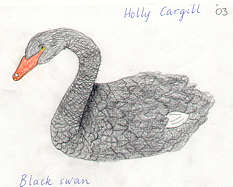 Builds a large open, thick walled nest of twigs, rushess and aquatic vegetation, in swamps and lakes. Lays 5 - 6 pale green or dull green eggsin a breeding season of autumn and winter, but sometimes as late as December.

Text by Stanley Barker sourced from "What Bird is That? A Guide to the Birds of Australia" by Neville Cayley; Published by Angus & Robertson 1973
and the "Birds of ..." series by the Gould League.