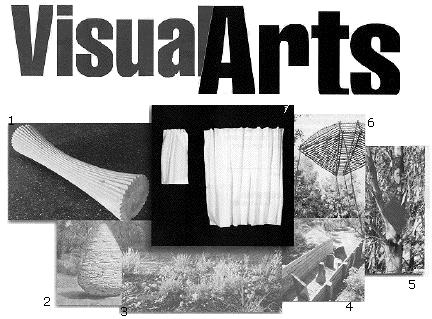 Surrounded by the tidal waters of the Yarra and accessible only by boat, Herring Island's natural and recreational areas provide a unique context for the Herring Island Environmental Sculpture Park, which opened as the highlight of the Visual Arts Program for the 1997 Melbourne Festival. For the inaugural exhibition, permanent works made of natural materials were created by British artist Andy Goldsworthy and Australian artists Julie Collins, John Davis, Ellen José and Jill Peck. In 1998, once again in conjunction with the Melbourne Festival, Australian artist Robert Jacks created an additional permanent work in Red Gum located near the Herring Island Gallery.

This year, continuing the alliance between Parks Victoria and the Festival, Melbourne artist Robert Bridgewater gives us Scales, a permanent commissioned work for Herring Island Environmental Sculpture Park, which is also included in the refreshing temporary exhibition Probe.

Working with sticks, earth, timber, paper, grass, mulch and various plastics in sites around the now established Sculpture Park, Probe's artists embark upon an exploration of geography, mythology, the environment, local history, sculptural form and conceptual practice in interwoven installations created especially for the Melbourne Festival. Probe also focuses on the playful and investigative processes of expedition and intervention: visitors wander the trails, discovering the art works by looking up through the trees, out from the headland, down underfoot, across the oval into the native wild garden, hearing the combination of the distant traffic noises and bird calls. The artists have traversed the same routes and their works reinvigorate and intervene with these serene surrounds.