As would be expected with a largely man-made landform, Herring Island's vegetation is dominated by introduced species. Of the 125 vascular species recorded on Herring Island, 97 (77.6%) are exotic. However, a small but significant component of indigenous species still exist, mainly in the northern section of Herring Island. A list of plant species found on Herring Island is given in Appendix 1.

Most mature woody vegetation on the Herring Island occurs on the levee. This consists of a mixture of indigenous river red gums (Eucalyptus camaldulensis), silver wattles (Acacia dealbata), and exotic species planted soon after Herring Island's construction. Within the levee banks, vegetation ranges from sparse, salt-tolerant herbaceous species in saline areas to shrub-covered silt mounds. These mounded areas allow greater salt leaching. Consequently, the majority of the more recent revegetation (a mixture of indigenous and non-indigenous native species) has occurred in these sites. The saline low-lying area in the north of Herring Island is subject to periodic inundation, and contains a number of typical swamp species, both indigenous and exotic. Vegetation on Herring Island is in a fairly degraded condition, with considerable weed invasion and tree dieback, influenced by deposition of saline silt and associated compaction from earth-moving equipment.

Although only 28 indigenous species have been identified on Herring island (comprising 22.8 % Of the total number of species), riparian, open woodland and grassland species are represented among these remnants. 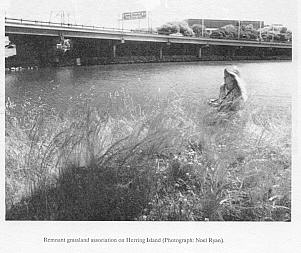 The small grassland community in the north-eastern corner of Herring Island is an easterly remnant of Victoria's basalt plains flora. A number of other indigenous herbaceous species occur in the intermittently swampy area in the centre of Herring Island. These include several Juncus species and salt-tolerant native grasses (Danthonia spp., Distichlis distichophylla).

This conservation status reinforces the need for revegetation on Herring Island as a means of increasing the viability of currently small populations of indigenous species, particularly in the face of such stresses as salinity, erosion and other soil problems (Section 1.5), extensive weed competition, and occasional severe insect irruptions. Indigenous species used in revegetation plantings should be of local provenance (i.e. propagated from seed collected on Herring Island, or from nearby areas of indigenous vegetation such as Yarra Bend and Studley Parks). This strategy conserves the local gene pool of these species, as well as improving the success of establishing plantings by using stock adapted to local conditions.

Herring Island's rehabilitation provides an exciting opportunity to 'recreate' in some of Melbourne's original vegetation. This will give Melbourne residents and visitors from elsewhere an impression of the local landscape in the days prior to European settlement, and instil an appreciation of Melbourne's unique indigenous flora.

Areas with moderate to high salinity hazard (Section 1.5) will require special attention in the revegetation program. As these areas are typically found at the base of silt mounds, a suitable strategy would be to plant mounds first, allowing some plant uptake/leaching of salt to occur before attempting to plant in more saline areas. The latter areas may require a successional approach to revegetation, using initial plantings of salt-tolerant species before the full complement of species is established. Further soil tests and small-scale planting trials are required to determine the most suitable means of revegetation.

Exotic vegetation on Herring Island consists of tree and shrub species planted by the Board of Works and a sizeable complement of weed species. Recent research (Yugovic et. al., 1989) regarding environmental pest plants has blurred the distinction between ornamental and weed species. Several of the tree and shrub species planted (e.g. Tamarix sp., Acacia longifolia, Albizzia lopliantlia, Bambusa sp., Schinus molle, Arundo donax) are extremely invasive, and are regarded as environmental weeds. The approach adopted in this Management Plan follows that of Drohan (1987), who categorises exotic species in terms of the priority accorded to their control or eradication. Highly invasive species which threaten both existing indigenous vegetation and revegetation plantings should receive the highest priority (P1). A list of these species is included in Appendix 1. These species represent nearly half (49.5%) of Herring Island's exotic vegetation.

Species designated as F2 (Appendix 1) are less invasive species, and consequently pose a lesser risk to remnant indigenous vegetation. Most of these species were planted some years ago, and provide a considerable proportion of the mature tree/shrub cover of Herring Island. As such they are important habitat for Herring Island's bird and insect populations. These mature overstorey species provide screening from freeway noise and external views over nearby industrial areas. The original planting on Herring Island occurred mainly on the river-facing slopes of the levee bank as a means of stabilising the levee and to provide screening for silt deposition works. However, as exotic species, these plants compromise the viability of indigenous vegetation communities on Herring Island, as well as the major management objectives. These plants should be removed in the long term, once revegetation plantings have matured sufficiently to fulfil the habitat and aesthetic functions.

To protect and conserve existing indigenous vegetation on Herring Island.
To revegetate Herring Island with species representative of the pre-settlement vegetation of the Lower Yarra as a means of conserving this gene pool, rehabilitating degraded areas, and to provide habitat for native fauna.
To maintain diversity within indigenous plant communities.
To control and where possible, eradicate exotic species.
To undertake appropriate research and surveys for effective vegetation management, and develop a strategy for revegetating highly saline areas.

Actions
High / Ongoing FL-1 Monitor remnant species, particularly the more vulnerable orchid and grassland species in Conservation Zones, and take appropriate action for their conservation. This will include hand weeding and replacement with appropriate species (see Appendix 4). High FL-2 Identify existing seed sources and propagate species for revegetation plantings. High FL-3 Fence the Conservation Zone to prevent access and possible damage of vulnerable indigenous vegetation. High/ Ongoing FL-4 Control and where possible eradicate Pl pest plants (Appendix 1). Techniques used should minimise disturbance and other environmental damage. Suitable measures include mulching (with inert materials or organic mulches free of weed propagules), spot herbicide treatment, ringbarking and cut-stump techniques
Low/ Ongoing FL-5 Remove P2 exotic species as revegetation plantings mature and fulfil habitat and screening functions (Appendix 1). Some dead trees should be retained for their habitat value where safe to do so. High FL-6 Develop a strategy for revegetation of the highly saline areas. Ongoing FL-7 Prepare prescriptions for the protection of vegetation and for rehabilitation or regeneration works, prior to the commencement of development or management programs. Ongoing FL-8 Promote the use of natural regeneration of native species in rehabilitation programs, supplemented as necessary by planting. Use seed and cuttings collected locally, or from the genetic stock occurring naturally on Herring Island. Ongoing FL-9 Attempt to remove weeds/weed propagules from the site before planting or regeneration works to minimise the spread of pest plant species. Ongoing FL-10 Chemical methods of weed control should only be undertaken by persons trained in the use of herbicides.