BASIS OF THE MANAGEMENT PLAN 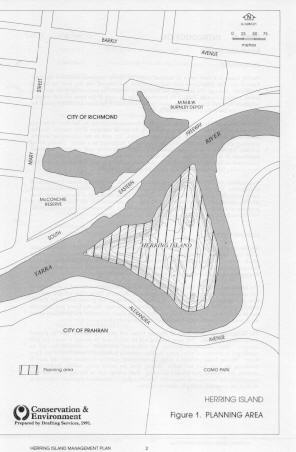 Herring Island was temporarily reserved as a site for Public Purposes in 1984 pursuant to Section 4 of the Crown Land (Reserves) Act 1978. This Management Plan outlines detailed actions for the protection and use of Herring Island and makes recommendations regarding points of access and use for the surrounding river channels and adjoining bank areas in Richmond and South Yarra (Figure 1).

Herring Island is a major landmark in the lower reaches of the Yarra River. Its topography is distinctive, a result of extensive beaching, silt deposition and landscaping works. A steep peripheral levee bank screens the central portion of Herring Island from noise and visual intrusion from the South-eastern Arterial Road Link and surrounding developed areas. The internal area of Herring Island is generally flat, with a few hummocks which provide both landscape interest and excellent views across Herring Island and to the urban areas beyond.

The bush character of Herring Island is provided by small remnant vegetation communities (riparian, grassland and open forest species) dominated by river red gums (Eucalyptils camaldulenisis). Swamp mahogany (E. botryoides), other eucalypts (E. teucoxyloii rosea) and paperbarks (Melalcuca styphelioides) planted in the 1930s also contribute to this bushland effect, although not indigenous to the area. However, the majority of plants on Herring Island including overstorey species, are exotic. These include a variety of mature trees and shrubs planted by the Board of Works, plus a number of pest species. More recent plantings of local and other native species complement existing remnants. The central portion of Herring Island is sparsely vegetated, due largely to salinity associated with silt deposition. Most of Herring Island's vegetation is significantly degraded as a result of salting and weed invasion.

The existing vegetation on Herring Island provides valuable habitat for a variety of bird species. Other fauna species appear to be less well represented.

The only major structure on Herring Island is the scout dormitory building, dating from 1965. Although internally vandalised, this building remains structurally sound and in good condition overall. Being set in a depression, the scout building has relatively little impact on the natural character of Herring Island. Several smaller structures, including a corrugated iron shower block and pump-house also remain on Herring Island. 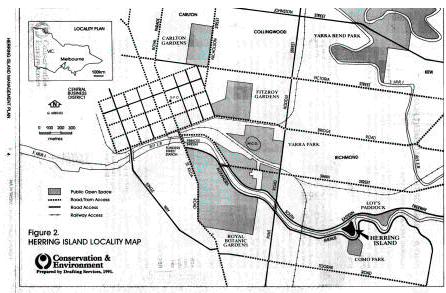 Herring Island is located only 4 km from the centre of Melbourne, within the City of Richmond. It is situated in the Yarra River, opposite Como Park (Figure 2).

Herring Island forms part of a corridor of parkland along the Yarra extending from Westgate Park to Warrandyte State Park. This island is one of the few bushland reserves along the Lower Yarra (Punt Road to Dights Falls), forming a link with nearby areas of remnant and restored indigenous vegetation upstream (Burnley to Yarra Bend Park).

Existing access to Herring Island is via the Yarra River, by means of private craft or swimming. Nearby launching sites are located on Alexandra Avenue and South of the McConchie Reserve freeway underpass. Peripheral transport (Figure 2) includes Church Street and Toorak Road trams; buses along Alexandra Avenue, and rail (Burnley and South Yarra stations are located within one kilometre of respective access points in Burnley and South Yarra).

"... be utilised for passive recreation and as a wildlife and vegetation refuge. Herring Island shall be kept free of organised use and camping shall not be permitted. The existing vegetation should be strengthened with plantings of indigenous species."

Protecting the Environment, A Conservation Strategy for Victoria (Victorian Government, 1987b)

Future management of Herring Island will be guided by the State Conservation Strategy (1987b). This Strategy specifically addresses urban areas through the Urban Nature Conservation Program. Objectives of the Program are to protect, rehabilitate and create open spaces throughout urban areas. Key recommendations of this Program include:

· directing management of parks and reserves to preserve and enhance indigenous habitats, so as to ensure the survival of populations of indigenous flora and fauna;

· protecting and restoring aquatic and coastal habitats to ensure that ecological stability, indigenous species and other features of scientific interest are maintained;

Also of major relevance to Herring Island is the Metropolitan Open Space Plan (1988). The general themes of this policy are:

· expanding and linking open space to create a network of parklands throughout the metropolitan area and into the adjacent countryside;

· ensuring that open space is distributed fairly throughout Melbourne, and increasing provision in suburbs which are relatively deficient;

· improving the relevance of open space to people and ensuring that it provides an appropriate range of settings;

Future planning within the state will also be guided by The Greenhouse Challenge (Victorian Government, 1989). This document stresses the need to undertake long-term planning for, and adaptation to, potential changes in the environment in areas including urban development, flora and fauna conservation, water resources and tourism.

The Social Justice Strategy encourages increased community participation in decision making at a Government level. Open days and provision for public comment before and after release of the draft version of this Management Plan are part of this process. The strategy further aims to reduce inequalities in access to goods and services. Particular emphasis is given to improving access for disadvantaged members of the community.

Further legislation relevant to the management of Herring Island includes: